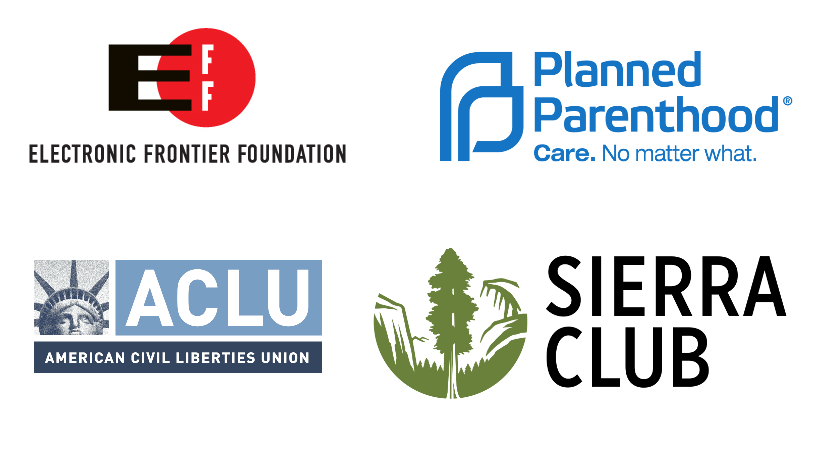 I’m taking the advice of my friend, Jeff:

Promoted from a comment: I wrote earlier about making a difference by donating regularly. But some folks can’t afford to, and some folks want to do more than that. So…

(a) pick two or three or five advocacy organizations that really matter to you, and sign up for their e-mail “action” newsletters or the equivalent. Almost all effective advocacy organizations have some kind of “blast” e-mail list that periodically sends out e-mails saying “write your local politician about X“. Find a few of them, and sign up. Then…

(b) do what those blast e-mails tell you to. When they tell you to call or write your local politician, do that. Every time. As much as possible.

If you really want to make a difference, sign up for one advocacy organization for each weekday, and then each weekday evening, before you go to bed, review what that advocacy organization wanted you to do that week and do it. You know, Monday for the ACLU, Tuesday for the National Resources Defense Council, Wednesday for the EFF, etc. etc etc. Ten minutes every day, every weekday. That’ll end up being like 250+ calls / mails / etc. from you in a course of a year. That’s a _huge_ mark you can make.

Remember that your local politicians have to decide every week how far to go on any given issue. They way they tell is by counting letters and e-mails. Even if your local politician is on the opposite side as you, you can scare them into _not_ sticking their neck out too far on a given issue. If a Trump-allied politician gets a ton of letters opposing a Pres. elect-Trump priority and only a few supporting it, they’re probably not going to invest too much effort or capital into advancing that priority. Which is a net win for our side.

Several advantages to this strategy: (a) no awkward meeting strangers and networking thing, for those of you who aren’t so much for that, (b) you can do it from the comfort of your own home/bed/whatever, instead of reading fiction or watching TV or whatever else was your routine, (c) doesn’t cost anything, really, besides the cost of a call or a stamp, and if it’s an e-mail, it literally costs nothing.

So if you went all out and wrote a letter a week, or two letters a week, or five letters a week, that’s a *huge* impact for the causes that matter to you. That’s as many as _two hundred plus_ little bits of impact over the course of a year, for about as much time as you might otherwise have spent on Netflix.

I’ve signed up for the action lists of four organizations so far.

I don’t have a fourth one for Fridays. I’ll keep an eye out for a good organization.

Since today is Monday, I’ve looked at EFF’s action recommendations, and sent an email to my representatives encouraging legislation that would make publicly funded research publicly available sooner, and signed a petition to encourage Universities to stop selling patents to useless patent-collectors.

I haven’t received confirmations that I’m receiving emails from PPH, ACLU, or Sierra Club, so we’ll see if they come in.

In Gmail I now have an “activism” label, with sub-labels for each day of the week. I’ve already set up a filter for EFF emails to go to the ‘Monday’ sublabel. I’ll check the appropriate label in the morning at breakfast and do the thing. (Or, I guess, decide not to do the thing.)

For accountability’s sake, I may post a weekly summary of the issues.