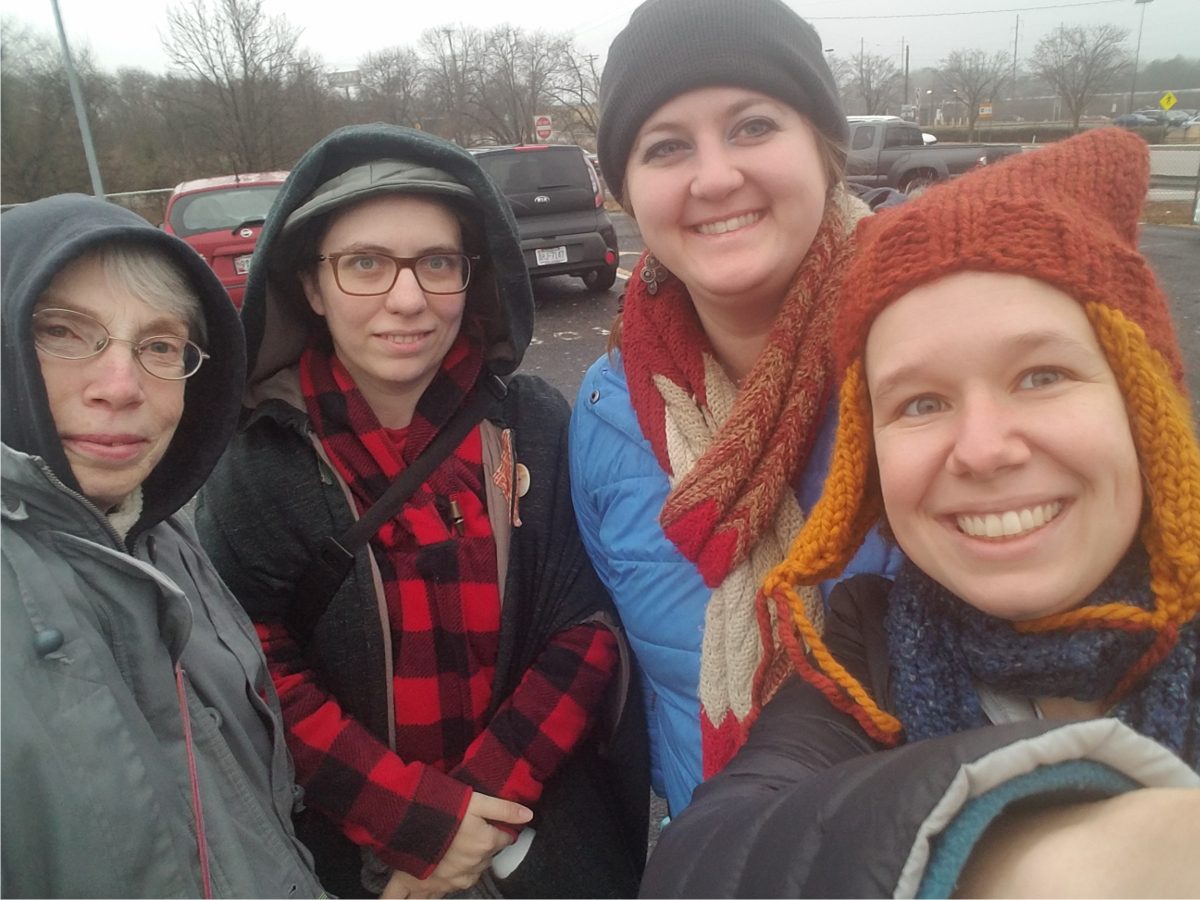 I heard about the Women’s March on Washington from my mom in the days after the election. As soon as she mentioned it I considered going. Sure, DC is far for a weekend trip, but I’ve done that drive before. When I told Aaron I might want to go, he was supportive, and at that point it started to feel like a real possibility to me. Not long after that I asked Carol if she was interested in coming, and she was.

Our tentative plan was to leave Martin with my parents for the weekend, and the three of us would drive to my mother-in-law’s, and then the four of us would go to the March together. That’s not how it turned out. My parents couldn’t watch Martin because they had to care for my grandparents, so we had to go to our plan B: Aaron stays home with Martin (and they go to the Ann Arbor March), and Carol and I go together to Baltimore. We found out our friend, melannen, was looking for someone to go with to the March so we made arrangements for that too.

It’s interesting to me how many things had to align to enable me to go. I have done that drive before, which made this trip feel doable, and I’d asked Carol to come, which meant that even when Aaron couldn’t go I still felt like I could. I wouldn’t have wanted to make the trek on my own.

A few questions I want to answer: “Why did I want to go?”, “What effect was I hoping to have?”, “Was this just about Trump?/Was this really independent of the election?”

The second question is the easiest, so I’ll answer it first. I believe that the purpose of these demonstrations is two-fold: 1) to fire up the attendees so they continue to act, and 2) to signal to the ambivalent–MLK’s white moderates–that they need to pay attention. I went because I wanted to be inspired and I wanted to be part of the signal. I didn’t entertain hope of changing the minds of the President or Republican Members of Congress.

To the first question: I went because I knew that it was the right thing? I’m an unapologetic 3rd wave (maybe 4th wave? Is that a thing?) feminist, and the message of the March was undeniably something I could support: “Women’s rights are human rights, and human rights are women’s rights.”

After the election, I needed to get involved in politics. The march was an easy thing to do.

I care about Objective Truth. Things like, what we learn through the scientific method and randomized controlled trials. Things like looking at data-sets and deciphering the true meaning from the data, not coaxing the data to fit a preconceived belief. Things like allowing new, better information to update prior beliefs.

It’s clear from Frank Lutz’s book, Words That Work: It’s Not What You Say, It’s What People Hear (which everyone should read), that Republican leadership has known since at least the 90s that this kind of truth is unnecessary to getting and keeping power. Ordinary people don’t have the time or inclination to follow up on the truth of statements. Ordinary people haven’t internalized the impact that changing the phrase “global warming” to “climate change” has had. I feel motivated to try to do something about it because the President has taken these ideas too far. At this point I feel like I don’t care about my personal impact, I care about being able to tell Martin that I was part of the resistance.

To the last question, I don’t think the March would have happened, or at least I don’t believe it would have been as big, if some other Republican had won. Trump won in spite of saying out loud terrible things about women and blacks and immigrants and disabled people. One of the signs at the protest said, “I can’t believe we still have to protest this shit”. The election made it clear to those of us who thought we were passed this, that indeed we are still in a time where this kind of language is not a deal breaker.

That said, the March was primarily about the state of politics in general. Hillary didn’t speak at the rally. It was about standing together to act.

I didn’t take any pictures at the March because I left my phone in the car. I didn’t want to have to hand it over if I got arrested. I figured there would be plenty of people documenting the occasion anyway.

Everyone I interacted with was polite and courteous and overall positive. My mother-in-law couldn’t stand for the whole 4 – 5 hours of speakers–more on that later–so while she sat, Carol, melannen, and I held hands to let people know that they needed to pay attention. Everyone did. No one begrudged her for not standing.

There were a few counter-protesters that the marchers dealt with by chanting “We Choose Love” or “When They Go Low, We Go High” while moving around them.

It was impossible for us to get a real sense of scope. All we knew was that it was bigger than the protests that my mother-in-law had been to and at least comparable to Obama’s inauguration.

I felt the overall logistics–things like Metro service and signage and sound systems–were well handled, but the programming was not. The rally started at 10, and the march was supposed to start at either 1 or 1:30. The speeches didn’t end until maybe 3:30 or 4. At 1:45 the crowd was definitely ready to move, but we were encouraged by the speakers to stay put. Some of the programming at that time was important–in particular the Mother’s of the Movement–and it’s a shame that it wasn’t earlier. Most of the music was ill chosen for a protest, in that much of it wasn’t participatory. The difference between the logistics and the programming was striking. That said, there were many good speakers, in particular for me: Ashley Judd, Gloria Steinem, Michael Moore, and Sophie Cruz.

We spent most of the rally standing by the Air and Space Museum, next to the Planned Parenthood van.

The March itself was more like a shuffle for a lot of the time.

One of the moments I enjoyed was when we encountered someone with banjo or guitar playing “We shall not be moved.” I miss pub-sing. I miss harmonizing. I wish my generation was writing this genre of music.

Staying together during the march was non-trivial, but we did. I felt like about once a minute I had to check whether we were all together. No doubt not having my phone on me made me feel more vigilant.

After the march we managed to get food at Fuel Pizza in DC, which was no small miracle. There was even seating upstairs. We spent a while there so that the crowds waiting to get on the Metro would die down. We were all hungry and exhausted. The Metro had no line when we finally used it.

At one of the more major stops, a group of marchers joined us. They led chants all the way to the end of the line.

This was my first protest. I don’t think it will be my last.