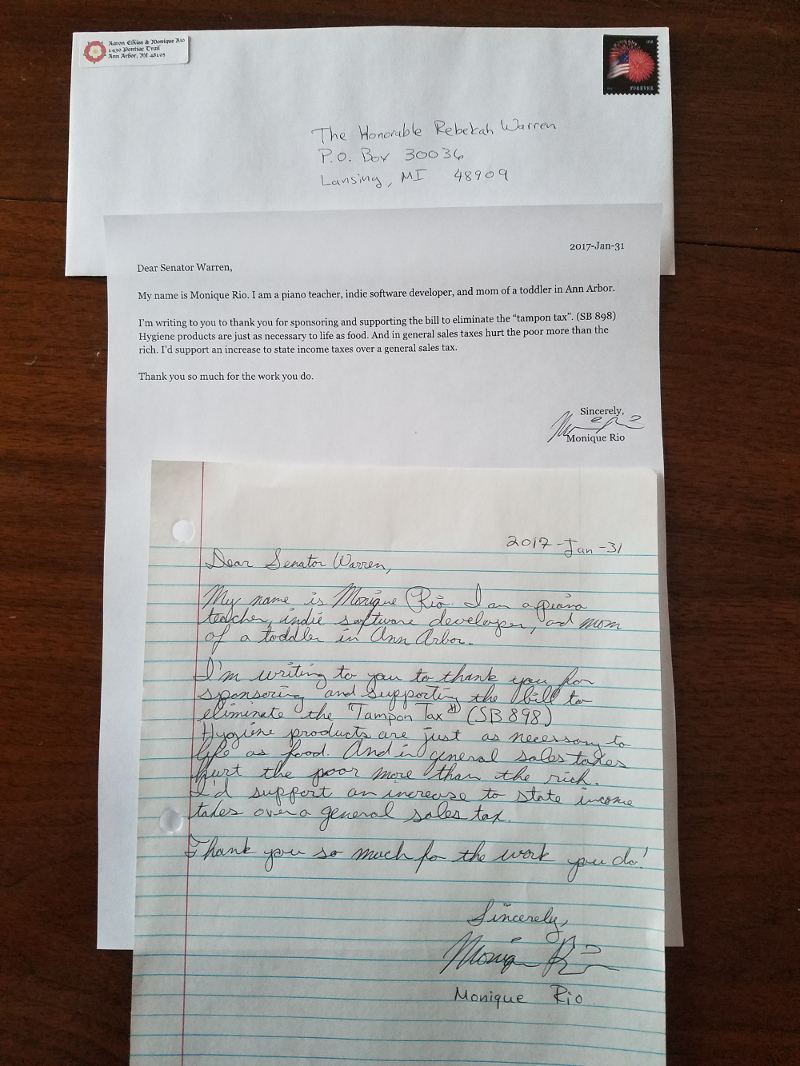 This month’s letter is more lighthearted: thanking my state senator for sponsoring a bill to eliminate the tampon tax.

My name is Monique Rio. I am a piano teacher, indie software developer, and mom of a toddler in Ann Arbor.

I’m writing to you to thank you for sponsoring and supporting the bill to eliminate the “tampon tax”. (SB 898) Hygiene products are just as necessary to life as food. And in general sales taxes hurt the poor more than the rich. I’d support an increase to state income taxes over a general sales tax.

Thank you so much for the work you do. 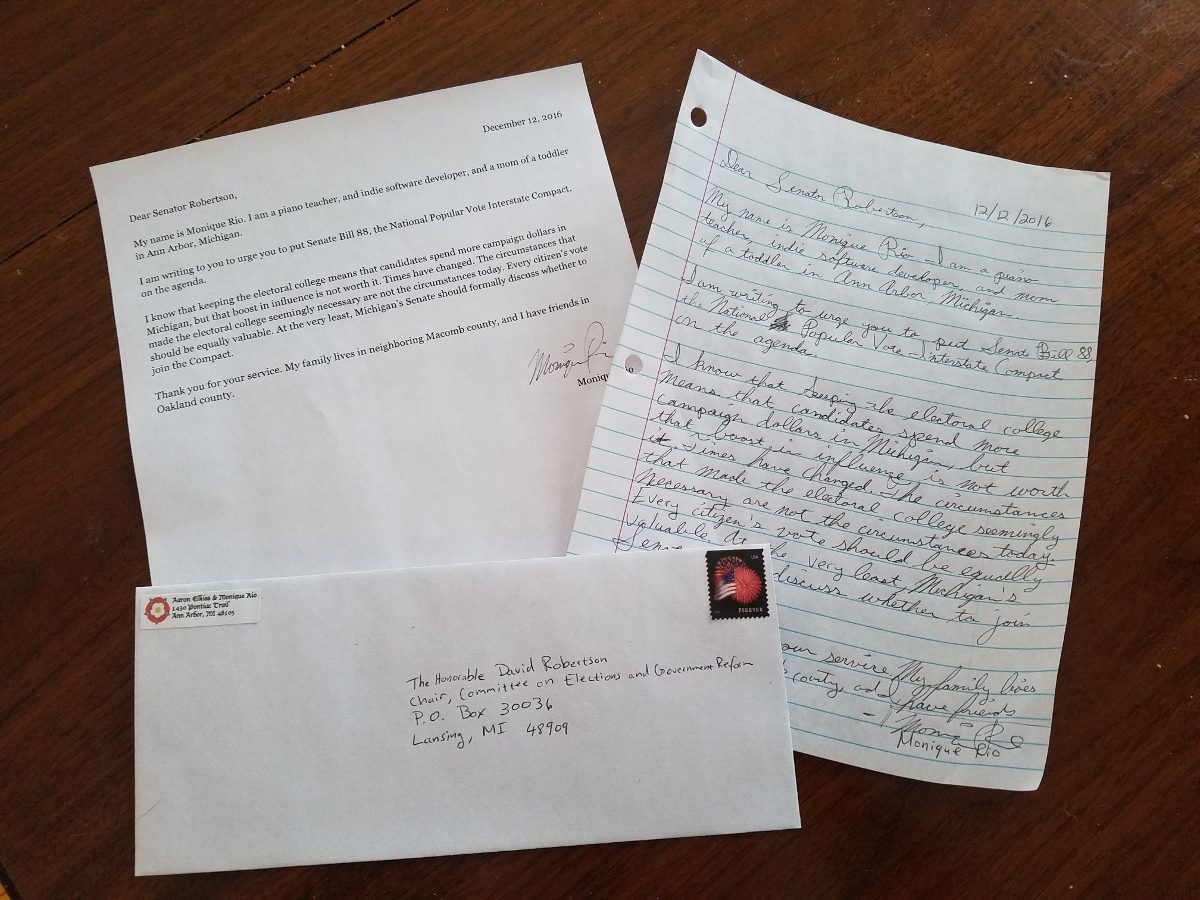 This month’s Letter to Congress is to Senator David Robertson, the Michigan State Senator who is the chair for the Committee on Elections and Government Reform. Senator Warren, in response to November’s letter regarding the National Popular Vote Interstate Compact, recommended that I contact him and urge him to put Senate Bill 88 on the agenda. So that’s what I’m going to do. You should too!

He’s the Senator for Oakland County, so I especially urge you to contact him if live in that county.

(Also, I’m super excited that my hand written letters were both read and responded to with non-form letters. 😀 😀 😀 )

Below is the text for my letter to Senator Robertson, and below that is the text from the letters I received from Senator Warren and Representative Zemke. (Did you know that Google Drive can do OCR?)

My name is Monique Rio. I am a piano teacher, and indie software developer, and a mom of a toddler in Ann Arbor, Michigan.

I am writing to you to urge you to put Senate Bill 88, the National Popular Vote Interstate Compact, on the agenda.

I know that keeping the electoral college means that candidates spend more campaign dollars in Michigan, but that boost in influence is not worth it. Times have changed. The circumstances that made the electoral college seemingly necessary are not the circumstances today. Every citizen’s vote should be equally valuable. At the very least, Michigan’s Senate should formally discuss whether to join the Compact.

Thank you for your service. My family lives in neighboring Macomb county, and I have friends in Oakland county.

Thank you for contacting me to express your support for electing the United States President by national popular vote.

I share your concerns about the antiquated Electoral College system, which defies the “one person, one vote” principle that underpins our democracy. As a result, under the current winner-take-all structure, candidates can win the Electoral College and thus become President without winning the most popular votes nationwide. Unfortunately, this discrepancy has in fact occurred in five of our presidential elections, and the results of this most recent election only reinforce the need to transition to a national popular vote.

It is for these reasons that I was proud to introduce Senate Bill 88 to enter Michigan into the Interstate Compact to Elect the President by National Popular Vote,” on February 10, 2015, in order to elect the United States President and Vice President by popular vote. After it was introduced, the bill was referred to the Senate Committee on Government Reform. It has received one hearing, but no vote has yet been taken on it. As you likely know, the bill cannot advance to consideration before the Senate as a whole unless it is passed by a vote of the Committee.

While I am continuing to advocate for further discussion on this critical legislation, I also strongly encourage you to continue your advocacy by contacting the committee chair, Senator David Robertson, to urge him to place SB 88 on the agenda. For your convenience, I have included his contact information below:

You may also wish to sign up for committee notices if you have not already done so. By signing up for these notices, you will receive notification as soon as the committee chair posts the next meeting date, time and agenda, and you will be among the first to know if SB 88, or any other legislation related to the popular vote, is placed on the agenda. For your convenience, I have provided a link to the committee meeting signup page below

Moving forward, please be assured that I will continue to uphold voting as a fundamental freedom that must be made as representative and accessible to all of our citizens as possible. Although the political climate in the coming years is undoubtedly going to be very challenging, please know that I remain committed to fighting for progressive values and policies.

Once again, thank you for contacting me regarding this important issue. If you have any questions or would like further assistance, please do not hesitate to contact my office at (517) 373-2406 or senrwarren@senate.michigan.gov.

Thank you for contacting my office regarding a national popular vote, and Senate Bill 88. It’s vital to the Democratic process to hear valuable feedback from the people I represent.

I strongly agree that determining the Presidential election based on the national popular vote, rather than Electoral College votes, would be a more democratic and logical system. This is a very interesting idea, and there are many obvious benefits it would have: it would divert exclusive attention being placed on Swing states, thus placing a greater emphasis on the larger amount of States and their respective ideas. The law would also aim at equalizing and increasing voter turnout regardless of which state a voter might live in. I look forward to collaborating with my colleagues as this legislation progresses, and plan to support these efforts to elect the President by popular vote.

Again, thank you for taking the time to share your thoughts with me. If you have additional questions or concerns, please feel free to contact my office at (517) 373-1792. 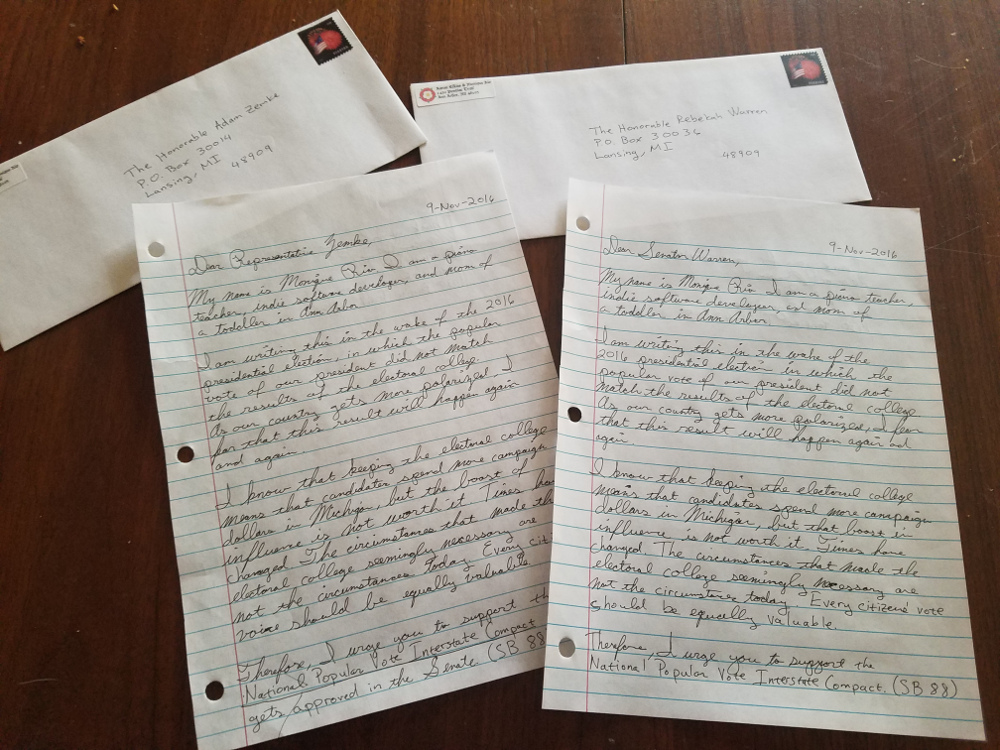 I’ve decided to use my emotions to being a more active constituent.

For each month of this presidency I will write to my representatives about the issues that matter to me. Per this video I will work toward increasing the time capital spent. It starts with hand written letters, and will move toward phone calls.

I will post on fb every month about the issue I’ve written to my representatives about. Please hold me accountable. And please join me in doing the same.

I’m starting with the National Popular Vote Interstate Compact. There is a bill in the Michigan Senate.

If you want help finding names and address of your appropriate representatives I will do google fu on your behalf.

Hillary is a martyr now. I will never forget. #alwayswithher

My name is Monique Rio. I am a piano teacher, indie software developer, and mom of a toddler in Ann Arbor.

I am writing this in the wake of the 2016 election in which the popular vote of our President did not match the results of the electoral college. As our country gets more polarized, I fear that this result will happen again and again.

Therefore, I urge you to support the National Popular Vote Interstate Compact. (SB 88)

Thank you for your service.
-Monique Rio